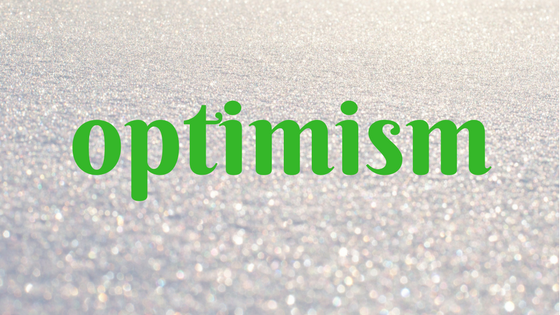 We had a snow storm this morning. It started at 3:00, and everyone hoped for a snow day, but when I awoke at 6:30 the roads were clear with no cancellations on my phone. Grumbly kids stumbled around and just made it to the bus; a dog swiped half an English muffin from a plate; I got a call from the pediatrician about an insurance billing issue.

Then I drove over to the pedi’s office with a new insurance card and they fixed the problem in a minute. There was NO traffic heading into the city, which is shocking, especially on a bad weather day. Equally shocking: there were several available spots in the parking lot.

The fresh snow coated the tree branches and provided traction on the typically ice luge brick sidewalks. The broken Xerox has been fixed, and half of the office is working remotely today so it’s peaceful here. Feeling much more pleasant and hopeful than I did at dawn.

Noun: hopefulness and confidence about the future or the successful outcome of something; the doctrine that this world is the best of all possible worlds. The belief that good must ultimately prevail over evil in the universe.

It’s hard to feel pleasant and hopeful these days. A consensus of what constitutes truth and logic has disappeared. People expect no consequences for their actions under the guise of free speech (not understanding – and being unwilling to understand – what free speech actually means). We’re facing little (well, maybe just inadequate – I’ll try not to exaggerate) appreciation or understanding of the value of education and research. Presenting a well-meaning, reasoned argument is fruitless against those who refuse to hear.

John Pavlovitz brilliantly articulates exactly how I’m feeling most days, and this morning his post “Reaching People Who No Longer Value Truth” crossed my news feed, just when I needed it. He writes:

“I want to believe all people can be reached, that there can be a place of common understanding in which to begin brokering compromise, even across the most vast of spaces. I wake up every day seeking to do this work, but with far too many of those in my neighborhood, in my family, and on my timeline—it is getting more and more difficult not to conclude that it is a fruitless endeavor. I’m afraid that reaching them may never again be an option—and that the only hope going forward may be to outnumber them.”

There. Hope. There is still hope. It’s small, and frustrating, and definitely not what I want, but it’s there. I tell my children all the time, “Just because you can, doesn’t mean you should.” Maybe I need to apply this to myself more. Just because I can argue my viewpoint, just because I can explain why I’m hurting, doesn’t mean I should. On the third, fourth, fifth, sixth try – maybe it’s time to acknowledge that the audience simply isn’t listening. They don’t care enough about me as an individual to hear. They insult, they accuse, they lie. Okay. Maybe they don’t hear me, but I hear them. I should know when to give up.

The ‘best thing.’ Not the ideal thing, not the desired thing, but the best thing, the most favorable. It’s not what I want, but it’s what I’ll have to take.