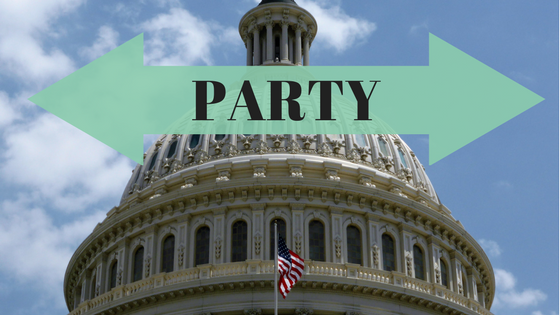 We think of ancient Greece as the birthplace of democracy, but the Greeks didn’t use political parties as we know them today. The ancient Roman senate contained groups that represented different interests, but they were the interests of noble families and wealthy merchants. The average citizen had little or no voice in the decisions made by the senate, a dilemma that didn’t change for centuries.

By the 17th century, organized parties began to develop in England in response to an alleged plot to kill King Charles II. The King, in a panicked effort to reduce outside power, dissolved Parliament. The ensuing uproar among the citizenry resulted in the formation of the Tories, who wanted a powerful king, and the Whigs, who wanted more individual rights and control.

After fighting and winning their independence from England, the new leaders of the United States disapproved of parties and warned against them. Yet, new parties formed almost immediately, and here we are.

Middle English (denoting a body of people united in opposition to others, also in sense 2 of the noun): from Old French partie, based on Latin partiri ‘divide into parts.’ Sense 1 of the noun dates from the early 18th century.

But how things have evolved!

At first glance, I’ve been thinking the Democrats and Republicans of today’s parties wouldn’t recognize themselves two hundred years ago. Southern Democrats were strongly in favor of slavery. Republicans were anti-slavery and led the fight against the southern states rights to own human beings.

There was a “Know-Nothing” party, that actually opposed Roman Catholics and foreigners. And the States’ Rights Democratic Party (the Dixiecrats), a segregationist party determined to protect states’ rights to legally segregate their citizens. Conservatives voted heavily Democratic. A 3-time Democratic presidential candidate, William Jennings Bryan, opposed a resolution at the 1924 DNC to condemn the KKK. Seriously.

Over time, the Republicans began favoring business interests, Democrats attracted farmers. In the 1930s the Democrats’ New Deal worked to lift the U.S. out of the Depression; Republicans pushed back on this ‘welfare state.’

I don’t know. Maybe things haven’t changed so much after all.

“However [political parties] may now and then answer popular ends, they are likely in the course of time and things, to become potent engines, by which cunning, ambitious, and unprincipled men will be enabled to subvert the power of the people and to usurp for themselves the reins of government, destroying afterwards the very engines which have lifted them to unjust dominion.” – George Washington, farewell address|September 17, 1796

“Denoting a body of people united in opposition to others.” The very nature of the word “party” means OPPOSITION, DIVISION. Maybe it’s human nature to form tribes and fight among ourselves. Or maybe there’s a better way?