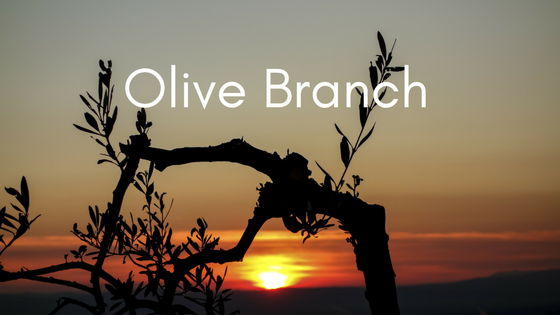 February 2, 2018 recednesrepositorium Words Leave a comment
Not long ago, after a painful disagreement, I received a message from a friend.
“This is my olive branch.”

The message listed all the reasons I’m a terrible person, and describe a decade of perceived and mostly manufactured slights and wrongdoings. She closed with “This is the last you’ll ever hear from me.”

She didn’t extend an olive branch. She beat me with a rose bush.

I mulled this over for weeks, and at some point I thought, “Why olives?”

Olive branch
1: a branch of the olive tree especially when used as a symbol of peace
2: an offer or gesture of conciliation or goodwill

The dove carrying the olive branch has long been considered a symbol of peace, largely due to the Christian belief of Noah and the Flood, when a dove returned to the ark holding a sprig of an olive tree, signaling dry land and life.

Others believe the symbolism derives from the slow growth of olive trees, which were not cultivated during war time and therefore represent times of peace.

But to some it is also a symbol of victory. In Greek mythology, Athena competed with Poseidon for the possession of Athens. With the gods as jury, Poseidon claimed possession with a thrust of his trident into the Acropolis. Athena, however, planted an olive tree. The gods ruled in favor of Athena’s gift, and granted her the rights to the land. (Related:  winners of the Olympic Games were garnished with olive wreaths.)

“Olive-Branch” – to reach out, with oil. Interesting. Oils have been used for thousands of years for what? Healing. Medicine, beauty, , nutrition, warmth. Mummification, to protect and guide a loved one to the next life. When we metaphorically extend an olive branch, we are reaching out in an effort to promote healing/forgiveness, to provide something beautiful and warm and productive. Some may use it as a weapon to secure their triumph, their conquest – I’m in a position of power here, accept my “olive branch” and HA! I’ve won! But I prefer to extend my branches in the former manner, a way to improve, to heal, to restore. Ultimately meaning victory, but for everyone.

More about olives, and branches, and cooking, and forgiveness: